Lamar Odom’s brief and bumpy ride with the Dallas Mavericks has come to an abrupt end.

The Mavericks and Odom spent Easter Sunday working out a parting, according to sources close to the situation, that frees the struggling Odom to leave the team immediately without actually being released.

Odom I’m sorry that things didn’t work out better for both of us, but I wish the Mavs’ organization, my teammates and Dallas fans nothing but continued success in the defense of their championship.
” — Lamar Odom

“The Mavericks and I have mutually agreed that it’s in the best interest of both parties for me to step away from the team,” Odom said in a statement to ESPN.com. “I’m sorry that things didn’t work out better for both of us, but I wish the Mavs’ organization, my teammates and Dallas fans nothing but continued success in the defense of their championship.”

Sources said Monday that Odom’s departure will be immediate and that the Mavericks intend to simply list him as inactive for the rest of the season instead of outright releasing him, leaving open the possibility that they could still trade him after the season in conjunction with the draft. Any team that has Odom on its roster as of June 29 must buy him out by that date for $2.4 million or otherwise accept responsibility for the full $8.2 million that Odom is scheduled to earn in 2012-13.

Even if either side had pushed for a formal release, there is little upside to taking that step now with Odom ineligible to play in the playoffs with another team because he wasn’t waived before the March 23 deadline. One source close to the 32-year-old told ESPN.com that the decision sets Odom up to “clear his head and start getting ready for next season” after his career-low numbers and minutes continued to dip as the season wore on.

Odom will not be at practice Monday, sources said, after he was given just four first-quarter minutes of playing time Saturday night in Memphis, accounting for the low point of a consistently rocky season in Dallas following his trade in December from the Los Angeles Lakers.

Odom’s representatives pushed for the trade to Dallas after it became known that the Lakers had agreed to trade Odom to the league-owned New Orleans Hornets as part of a Chris Paul blockbuster that was ultimately vetoed by NBA commissioner David Stern in his role as the Hornets’ lead decision-maker.

Throughout Odom’s season-long struggles to adapt to his new surroundings, Mavs officials and players have repeatedly expressed confidence that the former Laker could still be a playoff X-factor, pointing to the team’s 0-7 record without him as evidence that his presence — if only for the minute relief Odom gives star forward Dirk Nowitzki — has helped the team on some level.

But exasperation with Odom’s languid play reached an apparent breaking point in Memphis. Both coach Rick Carlisle and Nowitzki refused to discuss the Odom situation after Dallas’ 94-89 defeat to the Grizzlies.

The reality show that is Lamar Odom has ended in Dallas-Fort Worth.

Nowitzki, meanwhile, fielded questions for four minutes about his own struggles in the Memphis defeat — including two late turnovers — but ended the interview when asked about Odom.

Associates of the veteran forward, meanwhile, have long maintained privately that his lack of a clear-cut role with the Mavericks — where minutes behind Nowitzki are limited — complicated the transition. Lakers star Kobe Bryant said as much after a game in Dallas recently, describing himself as “pleasantly surprised” that the Odom deal wasn’t coming back to haunt his team.

“I hope they don’t unlock that mystery. I know. I know how to use him and to use his skill set and this, that and the other. But with this team, the roster that they had being pretty much set, it’s tough for him to be able to find his groove here.”

After declining to offer defensive anchor Tyson Chandler more than a one-year deal in the offseason to preserve future salary-cap flexibility, even after Chandler’s pivotal role in the Mavericks’ championship breakthrough last season, Dallas used the resulting trade exception created by Chandler’s sign-and-trade move to the New York Knicks to bring Odom in with the idea that the parties could help each other greatly on a one-season basis.

Dallas was initially seen as an ideal destination for Odom to start over after the jolt of being discarded by the Lakers, but he began the season well short of peak condition after a tumultuous summer on a personal level and never quite caught up.

Left reeling by the July murder of his 24-year-old cousin and a fatal car accident days later that killed a teen pedestrian after the car he was riding in as a passenger collided with a motorcycle, Odom did almost no basketball training during the five-month lockout. The contrast in preparation to his final season with the Lakers was stark; Odom won NBA Sixth Man Award honors in 2010-11 after spending the bulk of the summer of 2010 with Team USA, often playing as a center for a squad that won the FIBA World Championships in Turkey.

Odom leaves the Mavericks averaging just 6.6 points and 4.1 rebounds in 20.5 minutes per game while shooting 35.2 percent from the field and 25.2 percent on 3-pointers, all career lows by some distance.

Unlike a leave Odom was granted just before the All-Star break, there are no plans to bring him back to the team this time, sources said.

Tyson Chandler will be leaving the defending NBA Champ Dallas Mavericks for Times Square. Chandler will be signing about a 4-year deal with the Knicks after the possibility of acquiring Chris Paul might have went out the window because of the league may veto it. What do you think of the signing?

The Dallas Mavericks are one win away from winning the NBA Finals. Last night they won 112-103 and took a 3-2 series lead. The big key in these wins for Dallas is shutting down Lebron James in the 4th quarter. Game 6 is Sunday in Miami.

The Miami Heat had a lot to prove to all their critics ever since Chris Bosh and Lebron James joined the team in the off season. They are now in the NBA Finals and are up 1-0 in the series after last night’s game 1 victory over the Dallas Mavericks. Lebron had 24 points and 9 rebounds and D-wade added 22 points in the 92-84 victory.

I think what held OKC Thunder from advancing to the finals was the last series with Memphis and inexperience. Dallas was hungry and played like they were the whole series. With last night’s 100-96 win, they now advance to the NBA Finals awaiting the winner of the Chicago/Miami series. Who will match-up in the finals???

The Dallas Mavericks tore apart the LA Lakers during the second round of the playoffs and yesterday was the icing on the cake. Dallas blew out the Lakers and it was an all around team effort. Jason Terry had 32 off the bench and tied the playoff record for most 3’s in a game with 9. The Lakers Odom and Bynum both got ejected on separate plays. Bynum’s ejected was really uncalled for and deserves a nice fine and suspension. Dallas won 112-86 and moves on to play either the Thunder or Grizzlies in the Western Conference Finals. Was this the end of Phil Jackson’s ERA???

The spurs were able to get a split in Dallas last night with a huge 102-88 victory. Tim Duncan led the way with 25 points and 17 rebounds in game 2. Dirk had 24 points and 10 rebounds for Dallas.

Dirk Nowitzki scored 11 of his game-high 41 points in overtime last night in a 99-94 win over the Spurs. Drew Gooden added 17 points and 11 rebounds for the Mavericks. Tim Duncan led his team with 22 points and 14 rebounds.

Dirk Nowitzki had a huge game last night versus the Utah Jazz. Dallas outscored Utah 44-18 in the 4th quarter, and 29 of those came from Nowitzki, in the comeback win for the Mavericks. Dirk ended up with 40 points on the night and was 4 points shy of the record for most points in a single quarter. The Mavs won 96-85. 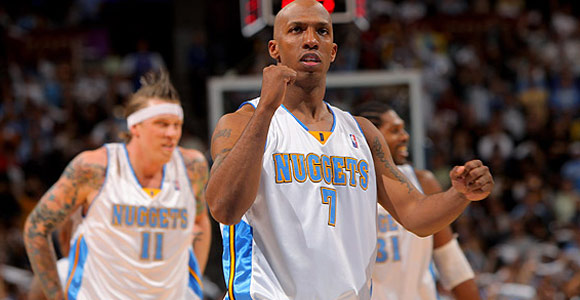 The Denver Nuggets are a surprise team for this season. A lot of people didn’t think they would be playing so well together, but the addition of Chauncey Billups has been the key to the team’s success. Last night’s game versus the Dallas Mavericks was just another example of how well the team is playing. After winning game one, the Nuggets just played like they are the team to beat in the Western Conference of the NBA. Carmelo Anthony scored 25 points and Nene also dropped 25 points in the 117-105 victory for the Nuggets. The series is now 2-0 Denver. Do you think they have a shot in making it to the finals?